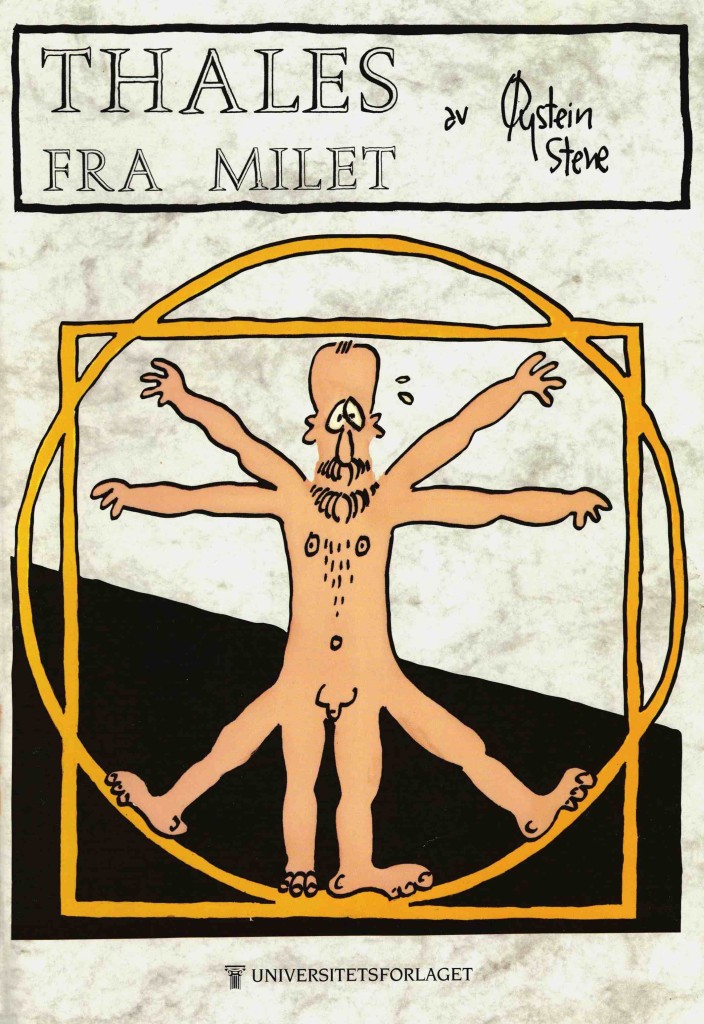 Thales fra Milet was published as a newspaper comic strip in the Norwegian newspaper Morgenbladet from 1993−95. Thales is considered the Western world’s first philosopher and in the comic strip, he meets philosophers from all eras. The album is a collection of the strips, and a new, longer series featuring Nietzsche as the main character. The album was published by Universitetsforlaget in 1996, and in Swedish translation by Nya Doxa in 1997.

Marit bugge in Utropia 20.11.1996
“Comic strips are generally considered to be one of literature’s least serious genres, but Thales fra Milet is a comic strip with an original angle that views philosophy from a new perspective.”

Hilde Sandvik in Bergens Tidene 30.09.1996
“Very few, if any, understand this quasi-philosophical comic strip about the pragmatic but also quite impractical philosopher, who perpetually anticipates the history of philosophy. Nonetheless, we laugh. We chuckle over deconstruction’s negative dialectic, the lyrical anti-subjective manifesto and the Id’s sublimated surplus of libido.”

Øystein Vidnes in Studvest 25.09.1996
“The drawings are simple and to the point. Øystein Stene has a characteristic hand, which abuses one philosopher’s face after the next. In most cases, they are nonetheless not difficult to recognise. But what lifts Thales above the bilge of newspaper comic strips is the text and the abundance of ideas demonstrated. Here there are many good points and intelligent parodies. Stene displays both a good knowledge of – and above all – a healthy distance to his subject matter! Marx, Kierkegaard and Nietzsche are all priceless, along with the parody of postmodernism – or is it purely a demonstration?”

Lars Andersson in Vertex nr. 7 1997
“It is perhaps not a particularly good introduction to philosophy, but it is amusing. The strips are drawn in a relatively slapdash style, and the gags, too, are often far afield from philosophical justifications. Instead, it approaches slapstick and schadenfreude. Despite this, the book functions beautifully, thanks to its charming and laid back style. It is recommended for both those who have never read philosophy and those who have read a great deal.”